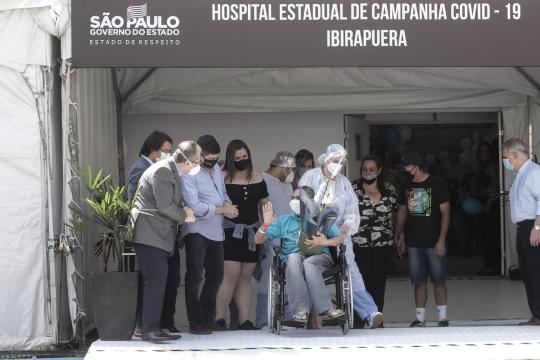 A patient is discharged from a temporary hospital in Sao Paulo, Brazil, on Saturday. The hospital is due to close on Wednesday. XINHUA

Bleak toll can be staved off if basic precautions are taken, WHO says

As the global death toll from COVID-19 approaches 1 million, the World Health Organization has warned that the virus may kill another 1 million people over the next nine months or so if people do not use the tools available to bring the disease under control.

Global COVID-19 deaths surpassed 994,000 on Sunday, according to Johns Hopkins University in Baltimore, Maryland. More than 32.8 million people have been infected with the disease.

"I think we have to focus on countries that have contributed much to this and how those countries can cut (the number of infections)," he told a virtual news conference from Geneva on Friday. "That could really slash the number of cases and the number of deaths."

Scientists now know a lot about the disease, even if there are still unknowns, Tedros said.

"Now we have very effective tools at hand, we have to implement those tools now," he said, referring largely to basic measures such as social distancing, testing, contact tracing and isolation.

Mike Ryan, executive director of the WHO Health Emergencies Programme, said a second 1 million deaths is "certainly unimaginable, but it's not impossible".

It will be a huge task to fund and distribute vaccines, he said, and it could be nine months before people receive them.

People need to reflect on the 1 million people who have died before thinking about another 1 million deaths, Ryan said.

"There is a lot that can be done to save lives, both in terms of disease control, existing lifesaving measures and the innovations that are coming down the pipe," he said.

Ryan warned that unless people take all the proper measures, the numbers that are being projected are not only imaginable but very likely.

Bruce Aylward, senior adviser to Tedros, said that whether another 1 million people die of COVID-19 is not a function of whether there is a vaccine, but of whether people can to put the tools, approaches and knowledge they have at their disposal to save lives and prevent transmissions.

"If we start thinking about it as a function of the vaccine, people will unnecessarily and unacceptably die as we wait for a vaccine. We should not be waiting."

In Russia on Sunday, authorities reported 7,867 new COVID-19 infections, the highest daily rise since June 20, and said the number of cases totaled more than 1.1 million, with 20,324 deaths.

Sergei Sobyanin, the mayor of Moscow, has urged residents over 65 and those with chronic illnesses to stay at home because of the increase in the number of cases.

Computers being used by Sputnik V's developers had been attacked by hackers several months ago, Gintsburg said.

Xinhua, agencies and Liu Xuan in Beijing contributed to this story.